345 million years ago… Khao Sok was covered in a delta system (similar to today’s Mississippi delta). The landmasses started to erode and mudstone and soil fell into the delta. This made both the rivers and the sea shallow and corals and other organisms were developed. 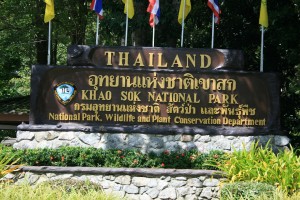 280-55 million years ago… More eroded mudstone and soil fell into the delta, and this created the limestone we see today.Fossils from this period tell us that the sea was warm at that time and that Khao Sok was part of a huge coral reef stretching all the way from China to Borneo. The coral reef was 5 times bigger than today’s “Great Barrier Reef” in Australia. Granite mixed with limestone and other chemicals, and a lot of tin and tungsten was made.

66 million years ago… Today’s landscape was founded. The limestone was forced upwards when the Indian land-plate crashed into the Eurasian plate. (This happened at the same time as the Himalayan was formed. As the Himalayan Mountain rose, Thailand was moved south-eastwards). The ice age never affected Khao Sok much. The ice never reached this far south in Asia, leaving the landscape and the rivers as they were. When the ice melted again, more water than ever floated into the rivers of Khao Sok, making the flora even richer than it was before which is why the rainforest in Khao Sok is older than the forests of Central America and the Amazons, which were covered with ice.

50,000 – 37,000 years ago… At this time Khao Sok’s mountains belonged to the same mountain ridge as Borneo. Evidence has been found of human habitation in Borneo from this period. It is believed that the same people inhabited Khao Sok as well, since the landscape with all its caves, fruits, plants and animals, was similar to Borneo’s landscape.

In 1800… The first historical evidence of human inhabitants in Khao Sok is from 1800. It was during the rule of Rama II and theconflict between Burma and Thailand. A group of survivors from the west coast were forced to hide away in the forest. They discovered the richness of the forest and quickly learned agriculture, fishing and hunting in order to survive. Quite a lot of the forest was cut down to make room for the growing population.

In 1944… A deadly epidemic swept through the same group of people. The few survivors moved away and the old village was named “Ban Sop (The village of the dead)”. The jungle could rest for a while. 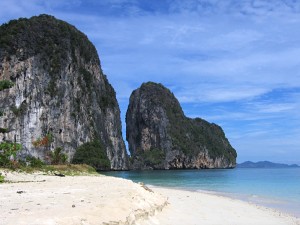 In 1961… A road was build straight across the area, to connect Suratthani on the east coast and Phang Nga on the west coast.Many people settled down along the road and cut down trees and vegetation to make room for houses and plantations. The area was rich with tin and timber, and the government began to sell properties for logging and mining. It was a big loss for the forest.

In 1971… It was discovered that the old delta system was nearly intact and Khao Sok was considered as a possible el-supply for southern Thailand. The area was inspected furthered and people started to realize the wealth of vegetation, animals, limestone mountains and waterfalls. It was decided that all logging and mining should stop, but it took many years before this actually came into effect. 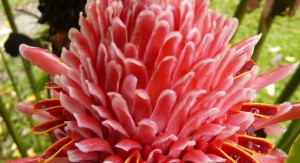 wanted in the community, and ended up being considered outlaws. They camped far inside the jungle to avoid the army, which was looking for them. These conflicts made part of the human population in Khao Sok disappear and the rainforest had a chance to breathe.

In 1980… Khao Sok was officially established as Thailand’s 22nd national park on the 22nd of December and measured 645 km2. Later the same year, the borders of the national park were changed to make it possible to flood an area inside Khao Sok, to build the Rachabrapha dam. The dam still supplies large parts of Southern Thailand with electricity. A huge rescue operation to save the wildlife took place before the flooding.

More than 1300 birds, mammals and reptiles were captured and moved away from the area. Sadly, the operation was aimed more at helping the human consciousness, rather than to actually save the wildlife. A majority of the animals died during the relocation. It was a major blow to the wildlife.

In 2001…The national park was extended from 645 km2 to 739 km2. The number of wild animals is constantly increasing, and the area surrounding the Rachabrapha dam (the Cheo Larn Lake) is once again full of life.

In 201.… You visited Khao Sok and had the time of your life!

Note: Above information is an excerpt from the book ‘Waterfalls & Gibbon Calls’ by Mr. Thom Henley. You can find more details about his books and projects at his homepage www. thomhenley.com.

“Excellent stay at Nung House!  Big, clean rooms in a spacious garden. Staff are exceedingly friendly which is what made the stay so good. On site restaurant serves excellent food and organises tours for you. Brilliant value for money and a great night’s sleep too. Bring a torch as it’s a bit dark getting to the village at night!”
Racheybee,

“Very welcoming! I really enjoyed my stay.  The room was basic, but the setting is beautiful and the owners were really nice and welcoming.  The food was very good and the atmosphere is great.  A kind of a cool Jamaican vibe.  Great location – quiet, but a very short walk to the village.“
Julief70,

“Great atmosphere, good value for the money!  Stayed here one night and would come back again.  Very friendly staff and bungalows from 300 baht to 600 baht.  Our’s for 600 was completely new and very clean.  Staff has good prices for tours.  I can recommend the place to everyone.“
Strelowski,